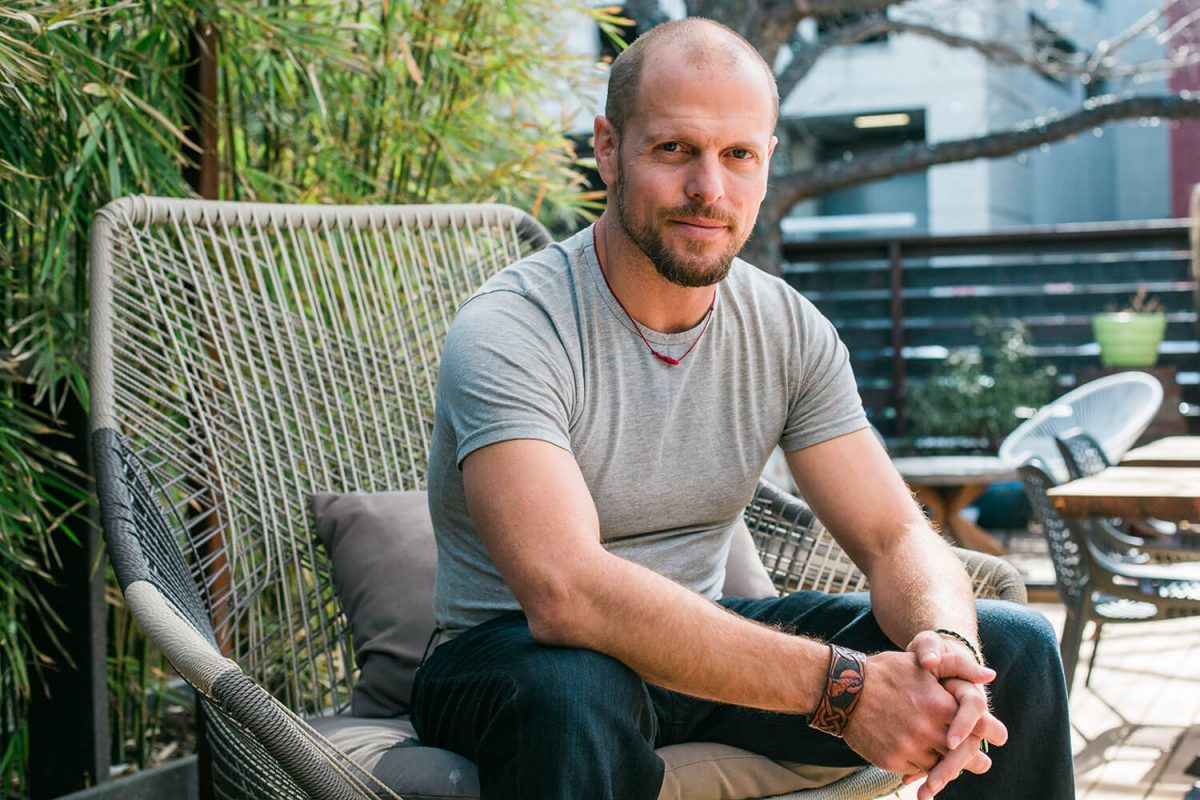 The Tim Ferriss Show Podcasts made a mark for being the first business and interview podcast to surpass 100,000,000 downloads. His podcast digs deep into pro sports, investing and many more.

Popularly known as a life-hacker, the New York Times calls Tim “a cross between Jack Welch and a Buddhist monk.”

Ferris is not just a podcast host, but is also a self-made millionaire, tech entrepreneur, self-experimenter, and Silicon Valley angel investor.

Fortune Magazine’s Term Sheet followers selected The Tim Ferriss Show as their top podcast in business. Additionally, Tim’s podcast remains to be a consistent top placer in the “Best of” Apple podcasts.

His book “The 4-Hour Workweek” is translated into 40+ languages and talks about living more and working less. It has sparked controversy, and therefore, interest, in many readers and business professionals who believe this concept is a fraud.

Each episode in the Tim Ferriss podcast is his attempt to extract tricks from eclectic areas. For instance, he – unapologetically – shares no BS hacks on investing. He unravels world-class personalities and shares his own routines, favorite things, and management tricks.

We have compiled our all-time favorite Tim Ferriss podcasts. In this top ten list, discover some of the best conversations you can find online:

Almost-EGOT winner Jamie Foxx is a great entertainer and storyteller. He is the best definition of the word badass, and he proved all that in Tim Ferriss’ 124th podcast episode.

Ferris deconstructed this world-class performer in probably one of the most random (yet cohesive) conversations the host has ever had with a guest.

How badass and real is Jamie Foxx? Firstly, Jamie played live music. Secondly, he did his Oprah impression, and a dozen more. Lastly, and most importantly, he generously shared his origin stories. What else would you ask for?

This 2.5-hour interview is mind-blowing and refreshing as it enables you to witness Jamie’s thought process. Moreover, if a triple threat is what you’re into, this is it!

In this episode, Tim Ferris had a conversation with one of the scariest and leanest human beings you could think of – Jocko Willink.

Despite being in the Navy SEAL for 20 years, Jocko seldom does mainstream interviews, but in The Scariest Navy Seal Imaginable….And What He Taught Me (Tim’s 107th episode), he comfortably opened up about his active SEAL military experience, and how it impacted his business.

On one hand, he shared the qualities he believes make a good leader. On another, he emphasized the importance of balance, one of the key points of his book, The Dichotomy of Leadership.

3. Arnold Schwarzenegger on Psychological Warfare (and Much More) (#60)

In Tim Ferris’ 60th episode, he interviewed the Terminator himself – Arnold Schwarzenegger at his kitchen table. This man needs no introduction.

This episode allowed the listeners to anatomize Arnold, the actor, and learn a side of this clear-headed, smart guy, that the audience doesn’t usually see. It’s dumbfounding to discover his psychological game, and how he utilizes this to his unmatched success in life.

The story of how he uses psychological warfare to lead Ferrigno in defeating himself is one for the books. It shows how visionary of a man he is – bodybuilding and beyond.

Dr. Dominic “Dom” D’Agostino has built a reputable name for himself when it comes to fitness, performance and health. In this episode, however, he humbly broke down complex concepts to establish an in-depth conversation that could save lives.

This particular episode is for anybody who is invested in strength training, ketogenic diet, and intermittent fasting. D’ Agostino gamely shared how he managed to deadlift a 500-pound weights, 10 reps, amidst a seven-day fasting.

This is simply one of the best keto and low carb podcasts available in cyberspace. Full of his anecdotes, researches and tests, it could help listeners improve the quality of their lives.

Tim Ferris sat down with world-renowned performance coach, Tony Robbins, who Oprah refers to as “superhuman” in his 37th episode.

Robbins has changed the lives of many personalities. He continues to do so with the career that he has.

This is a chunky, meaty, interview that has become a two-part conversation. Educational and insightful, it covers everything from Tony’s morning routines to more trivial subjects like politics and society.

If you think you’ve heard enough about Tony, this conversation will prove you wrong. Discover the 3S strategy for success, and jot down the four common traits the best investors in the world share. See how you can apply these lessons to yourself as well.

This episode will walk you through pain, humor, tactical details, emotional redemption and gripping stories. It was a genuine, open interview that took an unexpected twist with Debbie’s candidness.

The conversation threaded on sensitive and crucial grounds that Milliman graciously warranted.

7. Tony Robbins — On Achievement Versus Fulfillment (#178)

Tim welcomes Tony Robbins back to cover more topics they haven’t discussed in the previous episode (top 5 above). He shot rapid-fire questions to Tony who revealed the quotes he lives by and how he takes action on them.

Having advised the likes of Serena Wiliams, Leonardo DiCaprio, etc., Tony isn’t new to hearing advice himself. Here, he talked about his best investment ever and the worst advice he regularly hears.

Episode #178 is the second-best of Tony’s interviews in Tim’s show (out of more than 3 appearances).

Tim Ferris launched his podcast with Kevin Rose whom he considers as one of the best “stock pickers.” Kevin co-founded Digg, Pownce, and Milk (later sold to Google). In Spotify, Tim describes this debut as a “bad, first episode with heavy drinking and drunkenness.”

They talked about tons of topics – almost everything under the sun – including why Kevin is game to work at McDonalds. Both hilarious and kicking each other’s ass, it’s one of the best raw interviews you can find on the internet.

Fitness fans took delight as Tim talked to one of the popular strength coaches in the world, Charles Poliquin.

A few years before he died, Charles enthusiastically chatted with Tim about what he did best – training and nutrition.

Most interesting here was how he simplified the concept of neurotransmitters, and how he tailor-fitted it to his training programs.

This episode will lead you to understand Charles’ passion for strength and his approaches to fat reduction and strength workouts.

Likewise, Charles discussed ways to eliminate stretch marks after an extreme fat loss in which you could learn a thing or two.

In this episode, Tim talked to Mr. Money Mustache himself, Pete Adeney.

Pete Adeney was a computer engineer who never had a real job since 2005. Still, his life is the real goal as he had his early retirement at 30. Not everyone can do that!

MM credits his success to basic index-fund investing, and in this conversation, he answered HOW.

Mr. Money Mustache is one of Tim’s most requested guests online, and it made sense after this episode. His voice of reason resonated in the audience as he shared his insights on early retirement, and living a quality life.

Why should you listen to Tim Ferriss podcasts?

The internet is filled with a lot of podcasts from many different personalities out there; but, Tim Ferriss podcasts stand out because they are fun, and they cover a multitude of topics you can imagine.

His interviews, no matter how long, truly capture the thought process of the guests. Listeners get to see (or hear) the person behind the famous names that we know. Tim candidly opens them up with their quirks and lifestyle to which the audience is invited to participate.

Tim is also able to deconstruct the depth and breadth of his interviewees and turn their stories into meaningful takeaways.

In conclusion, Tim truly is “the Oprah of audio,” all thanks to his reach and influence to make people shine

Has your favorite Tim Ferriss Podcasts episode made it to our list?

Go binge his past episodes and deconstruct the mind of world-class performers. From business, arts, sports, fitness, nutrition – this guy doesn’t run out of conversation to spark.